Diary of a Potty Training Mom 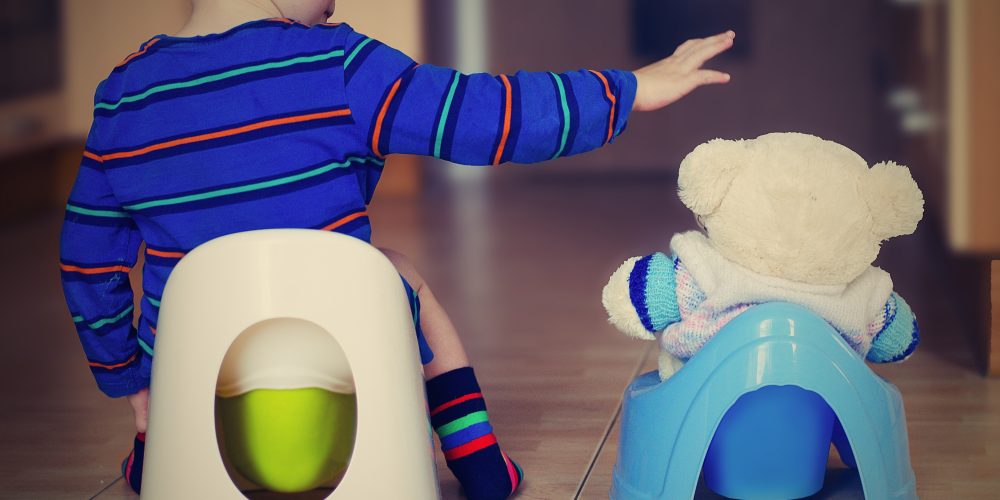 Spring break! The perfect time to potty-train my two-and-a-half-year-old son. Since he was out of school, why shouldn’t I focus on potty training for a week and a half straight? I tried once before, but I wasn’t prepared. I wasn’t prepared for my kid insisting he needed to pee every 10 minutes, running to the bathroom for no pee. I wasn’t prepared for him to strip naked at Target while he yelled PEE! all through the store. Or the time when he undressed, ripping off his diaper midway through a long forest trail.

I wasn’t prepared then. But I’m prepared now.

I went to Wal-Mart and got the underwear, Paw Patrol and PJ Masks. I also bought training underwear and these plastic pants at the recommendation of a Wal-Mart worker. I created a potty chart and bought a ton of cute stickers, M&Ms and small rewards. I read numerous articles online and borrowed Oh Crap! Potty Training: Everything Modern Parents Need to Know to Do It Once and Do It Right from the library. I covered my couch cushions in plastic and apologized to my silky soft shag rug. I was ready. I had a plan. Supposedly this could be done in three days.

Saturday morning, we said goodbye to the diapers; my boy was running free and exposed. Per numerous articles and (I think) the book’s advice, only use diapers to nap and go to bed. Supposedly, the new felt sensation will motivate your child to use the potty. I mean, he was over anxious last time, so this time it should be a piece of cake, right? Nope. He peed. He peed on my couch. He peed on my floor. He peed on the beautiful shag rug. He peed. Then he pooped, and I almost cried. I lie. I did cry. Then I stepped in a puddle of pee. I was great at potty training puppies, why was a kid so much harder?!

Sunday, after a good cry, I woke up ready to take on 1 & 2. This kid wasn’t going to get a chance to pee on my floor. I watched him like a hawk. I never stared at anyone’s crotch as much as I stared at his(things I never thought I’d say) and it worked. He would tinkle a little here and there, but I stopped him mid-stream and we were potty bound. He was catching on.

By Monday (day 3), we were doing great. M&Ms even lost their appeal while stickers reigned supreme. I decided it was time to put on the underwear. Paw Patrol to the rescue! We had some serious regression when we added in the underwear, but we flowed on.

I was losing my mind by Thursday. I was ready to leave the house and take a test trip to Dairy Queen. I packed a change of clothes. The whole 5-minute car ride I reminded him, “Remember, we pee in the potty. Not in our pants.” At this point, my son consistently says “no no pee, floor. No, no, no, pee potty,” while shaking his finger. He sat on a plastic bag in his car seat, which was stressful… every time he moved I thought the crinkle was a tinkle. But he did great and stayed dry! Whoop whoop!

The real test was Friday. We had outdoor plans in the evening, which included a port-a-potty. I didn’t think this one through. I packed like I was beach-bound. I wanted to haul his whole toilet, but my hubby convinced me otherwise (UGH!), so I just brought the potty seat cover. Then I packed multiple changes of clothes, shoes, pull-ups, diapers, etc., I could never be too prepared. I carried around the potty seat in a large bag hugged to my side as I anxiously waited. I waited as he jumped in the bounce house with ten other kids (AHH!). I waited as he climbed through the playground, and once again stared at his crotch for a wet spot. I waited. I pulled him aside numerous times to ask if he had to go. I was stressed. I watched the clock for hours and I waited. I texted his dad and admitted the anxiety was getting to me. We had a few awkward stand-offs in the port-a-potty. But, alas, still dry! About four hours into it, he finally went in the potty (and a little on my leg, we’re still working on aim, and those port-a-potties are small)! We had a six-hour dry period! Since that night, we’ve had numerous “dry” outings. In fact, we’ve yet to have an “accident” in public (knock on some serious wood).

But now for some real talk here.

Potty training is hard. Holy moly is it stressful! Don’t let mothers who spent months stripping car seats, stepping in puddles, staring at crotches and packing a week’s worth of clothes tell you otherwise. His 1s & 2s have become the constant conversation in my life. Bathroom stops make me late and my dirty towel intake has dramatically increased as aiming down is no fun.

Truth is, we’re still working on it.